There are a lot of methods to obfuscate code but they all share the objective of making the code less readable in order to thwart reverse engineering. One common method is inserting junk instructions to blow up code size making it hard to distinguish between meaningful instructions and code that effectively does nothing.

I propose a solution to automatically filter out junk instructions by tracking the execution state. Using Triton we statically analyze a code trace over obfuscated code and keep track of which instruction has which side effect (for example register and stack writes).

At an arbitrary stopping point, we can then use this information to recursively scan backwards for instructions responsible for state changes and mark them as good, or meaningful. This automatically excludes junk instructions as they ought to not make meaningful state changes by definition.

I have implemented a proof-of-concept script in Python that can be run in IDA Pro and statically remove junk instructions given an entry point. It is only about 200 lines of code.

I have been looking for an excuse to play around with obfuscated/virtualized code for a while. Recently I found a malware sample that was heavily obfuscated making reading the code almost impossible. Reports identified the sample to be packed with VMProtect, a commercial virtualization packer. Looking at it in IDA revealed that not only does it use virtualization but also heavily obfuscates the code by inserting junk instructions.

My goal then was to see if I can statically remove those junk instructions in order to be able to just read the code. I did a quick Google search for automatic junk instruction removal but did not find anything really. As I wanted to try myself at the problem anyway, I stopped searching for prior research. It is therefore possible that my approach has been done before and I have just reinveted the wheel. I'd be happy to read about how others solved the problem!

When I first set out to solve the problem, I meant to document the journey of solving the problem because I myself like to read about those the most but quickly noticed it is very hard to document the whole process with all the trials and errors and the thought process behind them. Reverse engineering is just an inherently non-linear process and as such that did not work.

I still hope the article is interesting enough in itself while describing only what worked eventually.

What are junk instructions 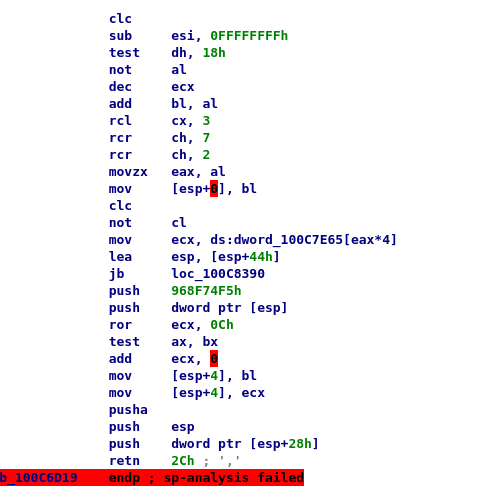 The lea is junk as it writes eax which is overwritten in the very next instruction.

Or using the flags:

The clc (clear carry flag) is junk because add sets the carry flag.

In general I decided on the following definition:

Basically, an instruction that writes a register, or a flag, or the stack, or the memory but nobody ever reads that value. Above examples are just that, they have a side effect (written register and written CF) but nobody cares about them before they are overwritten.

A very practical question I had to answer first is: Where do I start my automated code analysis, and where do I end? What are the boundaries of code I analyze in order to remove junk instructions.

In the previous section, you may have noticed the emphasis on ever. That is an actual, hard problem, because we need to start and end our analysis for junk instructions somewhere.

In order to dismiss an instruction, we must be certain that no single instruction in the whole code ever cares about any side effects it has. But that would require perfect knowledge of the whole program and I'm sure this sooner or later fails on the halting problem because everything does. In any case, it's commonly known that for computers based on the Von Neumann architecture this is a hard problem.

For very simple programs (think no conditionals, just one basic block) we can easily gain total knowledge of it, but what about a programm where some register is written and only a conditional block inside an if later on accesses it. Or worse, some conditonal block inside a loop only after the 1000th iteration accesses it. We would need to explore every possible code path and that would explode in our face. I looked into algorithms to find every trace through loops without repeating blocks, which exist but even for simple loops the number of pathes simply exploded.

So if we can't satisfy the ever requirement, what do we do?

This puzzled me a while when I had kind of an epiphany. The trick is thinking about how a code obfuscator knows where to insert junk instructions. Because in order to not change code semantics, the obfuscator itself must be sure that whatever side effects the junk instruction has doesn't matter. So if they want to insert a clc, they must be sure nothing ever relies on the carry flag afterwards, until some of the original code writes it.

So effectively, they have to solve the very same problem, requiring perfect knowledge, if they want a general solution!

Which is why I assumed they just narrowed the problem down to something like:

Basically, they just do dead stores as the examples above.

The question still standing is, where do we stop to deobfuscate code? The starting point shall be arbitrary for whatever the reverser thinks looks interesting. We also cannot analyze the whole program. Assuming the dead store hypothesis holds, we could stop at any writing instruction and start finding junk instructions. That would leave junk instructions for which a write happens afterwards.

I chose a different approach. The start for the analysis is arbitrary, and so is the end. I then assume any written register, memory, stack location at that point in time is relevant. In hindsight that is obvious. It will give us on overapproximation because there may be someone overwriting current state later on but that is fine.

So that was a lot of text for "where do we start, where do we end" - wherever.

After the trace we have to work backwards.

An example probably explains it best.

Here is our made-up obfuscated code:

We trace over each instruction recording state changes. The state initially is empty, and inside the state we record the instruction who wrote it.

Now we check the last state and mark every instruction inside good, which would be instructions (1,3,4,7). Then we walk over the list of good instructions and see what they depend on.

This iteration added 2 to the good list, so we check 2 again:

The final list of meaningful instructions is (1,2,3,4,7), instruction 5 and 6 got implicitly discared because nobody cared about their side effect and we have our deobfuscated code:

We of course do not know if anyone ever cares about edi being 42, or ebp being 0, but at this point in time, the instruction 4 and 7 are responsible for their value and as such cannot be discarded safely.

Of course it is not that easy (but at least close). In practice a bunch of things complicate the process.

Both instructions are meaningful. The 2nd one partially overwrites eax, but the upper 16 bit still depend on the first one. Luckily I didn't find any code in my VMProtected binary that does this. Therefore, I was lazy and simply converted each register to its largest form before recording writes. VMProtect does use a lot of di, ax, bh and so on but does never seem to alias them, so that works.

Problem 2 - What do we consider state?

This was a bit more difficult. Regarding every register for example as relevant does not work. If we consider eip relevant at all, every instruction will be marked meaningful as every instruction obviously modifies eip. I therefore excluded eip.

I also excluded memory writes for now but that should be a straight-forward fix.

This also is not that easy. VMProtect likes to use junk instructions that write to the stack and then later discards the values without using them.

When I tried to consider esp as relevant and tracked it, a lot of stack junk instructions kept being included so I decided on the following approach:

This means that the above example is handled like this:

pushad writes to 8 memory locations on the stack and we track them just like registers. lea then modifies esp and moves it up 40 bytes. Now esp is above all the previously written stack locations and are therefore removed from the state. As a result, the pushad is considered junk.

This worked surprisingly well and had no issue with ignoring junk instructions that affect the stack.

Finally, I'll talk about my code. From the start I wanted to have a static tool I could run in IDA that gives me readable code. I use Triton, a dynamic binary analysis framework to do the static code tracing. It also provides all the information I need, such as read/written registers, memory locations and so on. It is quite an amazing tool.

I will now write a bit about the evolution of the tool.

First, this is a code trace from the entry point of the VMProtected binary using Triton, in obfuscated form:

And this is the deobfuscated code from my tool at the beginning:

If you actually try to read the code you will find it problematic when it comes to stack accesses. As described above, I do not track esp so instructions that just modify esp like:

are not in there. Therefore the code is unreadable as we never know what stack location is accessed. I thought about how to solve this and chose the following approach.

Thanks to Triton I know what actual stack location each access is going to. So I just give each unique address a name. This gives us the following:

We now can easily read the code and stack accesses are obvious too.

I was also required to add some workarounds because Triton does not implement x86 semantics cleanly. I've opened an issue on github for it. For example the rol instruction does not read the carry flag but due to the implementation (it reads the old value to write it back if the rol is a special edge case) Triton would actually say rol reads the carry flag leading to instruction dependencies that just aren't there.

The deobfuscated code above looks nice and all, but I have yet to prove the result is worth anything. After all I just might have discarded important instructions.

So as a proof I will use the above code and calculate the jump location at the end. I've annotated the disassembly:

And to confirm that result, here's the target in OllyDbg:

So the deobfuscated code actually seems to be good enough for that. This doesn't prove it didn't discard any important instructions but the result is usable.

I quickly noticed my stack var system is fine but when you move on to the next code blob obviously none of the names help anymore. So to actually make the tool practical I may need to see how to handle the stack issue globally.

As mentioned above, register aliasing is on the TODO list, as is just a general code cleanup, it's really not pretty. Memory writes aren't considered relevant yet, which I need to add in, too.

And obviously the code only works for x86 for now but porting it to x64 should be easy.

I'm quite happy with the result for now. Thank you for reading so far!

You can find the script on my github

If you want to see the unadorned raw output, see output.txt